On Sunday 7 October 2018, this moment happened. 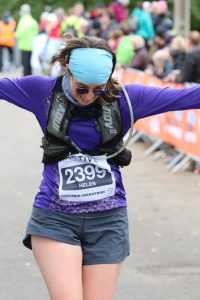 It’s me at the finish line of the Kielder marathon – a marathon that involves a full circuit of the beautiful Kielder Reservoir in Northumberland.

It’s odd to say it but I can attribute my achievement in that moment back to my study of systems thinking.  When students start studying the TU812 module, there is an exercise in considering the personal trajectory leading up to the point of starting the module and what the student anticipates moving forward.  I would never have dreamed of putting ‘run a marathon’ in my trajectory beyond the module.  There are some things you don’t anticipate, don’t plan, but in retrospect you can appreciate how earlier events influence the achievement of later ones.

In the case of my running, it all started when I reflected on this paragraph from Ray Ison’s book:

“To be highly competent in practice, any practice, requires that the learning be embodied – incorporated in the body itself […] This is clear if we watch an Olympic hurdler […] or performer or a very good teacher […]  Every learning involves an alteration of the learner’s body to perform the newly learned actions.  This takes time, many, many repetitions of the action each one becoming smoother and smoother as the elements of the action are coordinated as one continuous and elegant action. […] The same is true of activities we do in other ways.  To be effective in performing mental arithmetic, the person has to do that over and over again, that is practise.  Thus, to be effective, one must practise whatever the activity, and the practise “embodies” the action.”

So the week after I handed in my final MSc project in 2012, I started my first running ‘module’ – the Couch to 5k programme.  I deliberately thought of it as a ‘module’ – a short-ish term commitment to do that and see what I thought before considering next steps.  The 9 weeks went by and it did get easier – my heart, lungs and legs did adapt to that new activity and those hills that at first looked ‘too hard’ became achievable.  The success motivated me further.  I also realised I really liked it.  So after the 9 weeks, I continued running three times a week and gradually increased the length of my long distance runs.  My husband started running too so by January 2013, we decided to take the next ‘module’ together – train for a half marathon.  We followed the tips of a training programme – short runs, long runs, easy runs, intervals and so on – and we achieved the Great North Run that year.  The following year we kept fit and challenged ourselves with 10km and 15km trail runs.  Although Alex subsequently stopped running due to injury and has started cycling instead, I still go out three times a week.  And then this year, I decided to do the next ‘module’ – train for a marathon.  It involved stepping up to four times a week including towards the end some very, very long runs.  And, I did it – I’ll readily admit there were moments when I did wonder what on earth I was doing it for but on the whole I comfortably achieved a marathon distance.

Today, 4 weeks after that day I was running across Newcastle’s Town Moor and I reflected on how easy the movement of running is now.  I am not anywhere near competition standard but it does seem very much part of who I am and what I do.  I thought back to that paragraph that prompted me to start and reflected on the similiarities between becoming a systems practitioner and becoming a runner.

Both are helped by spurts of challenging yourself – studying modules and training for a new distance involve a real commitment.  They consume weekends and alter your home and family life.  They involve getting feedback on your performance which can sometimes be difficult and require you to find your motivation all over again.   But without embracing those challenges you don’t know how far your competence can develop.

Both are helped by ongoing practice and maintenance – it’s obvious that physical fitness goes away very quickly when you stop, but it is less obvious that you can get ‘rusty’ when you don’t ‘do’ systems thinking.  You forget the basic conventions of a diagram, you lose your confidence, you default back to ‘easier’ ways of thinking.  Neither are things that you can do for a ‘module’ and then stop.

Both are helped by connecting with others – runners always nod or say good morning to other runners (in Newcastle anyway!), friends who are runners always ask about how it’s going, at running events (and for some in running clubs) you always exchange stories about training and give each other tips.  This social element helps you identify with others.  Those sort of things happen between systems practitioners too – when we find each other, we want to talk about how it’s going and we learn from each other’s stories of good and bad experiences.

There is one difference I have noticed though, when I tell people about my marathon they often ask “would you do another one?”  (I still hesitate over my answer, I would love to repeat the day itself but I am not sure I can face the six weeks beforehand!) But, noone ever asks me whether I would study systems thinking again!  Actually I am really fortunate there – as an Associate Lecturer I do get to ‘do’ the modules again. And each time I learn so much from what the way that students relate to the materials and what they do with it.  This really keeps me on my toes – keeps me practising and reflecting on the nature of, and quality of, my own systems practice.  Being an AL helps me challenge myself, helps me to practice, and, helps me connect with others.  How great is that.